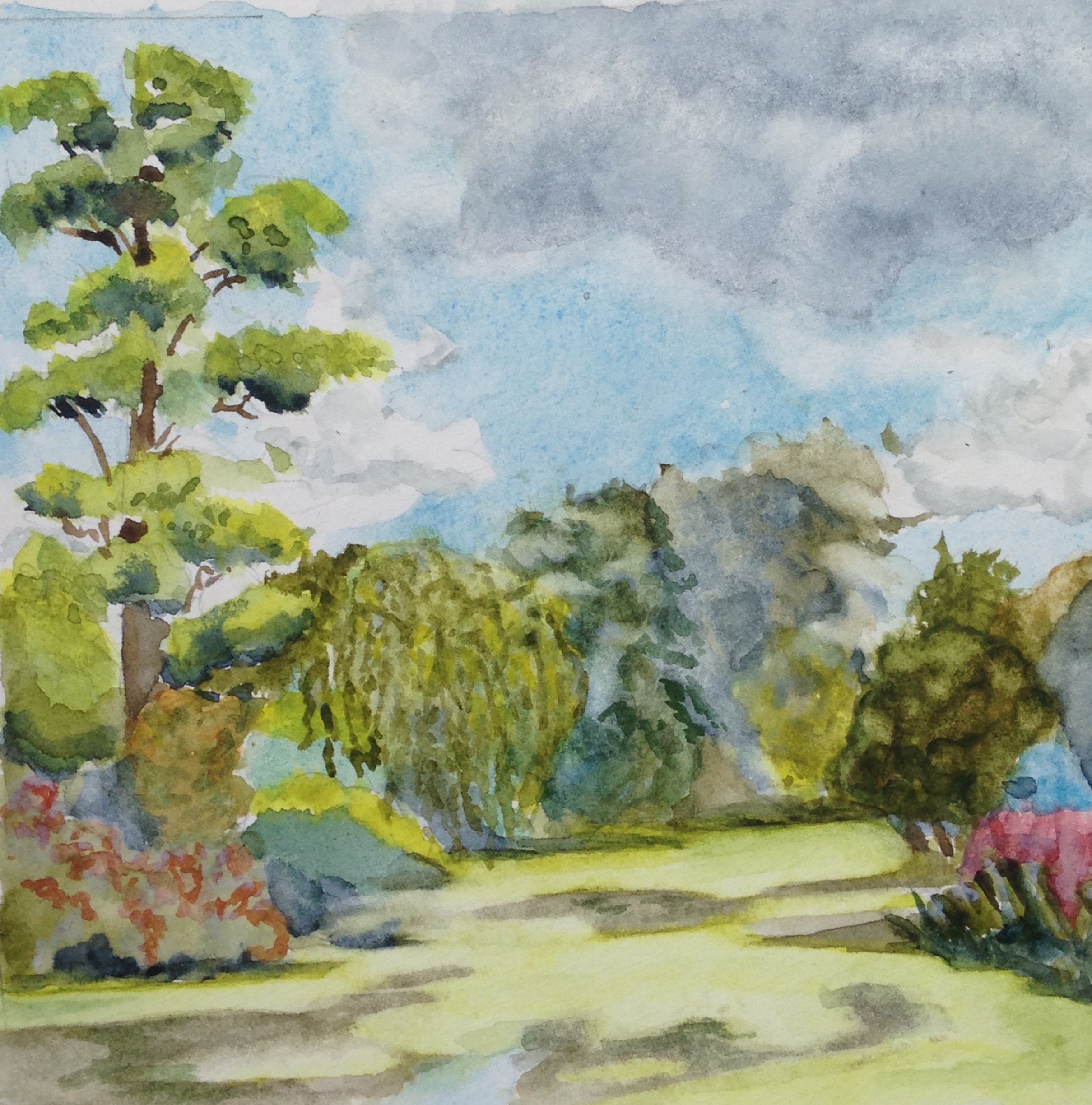 I return again and again to the lake in Kew Gardens. On the summer day of his visit, the water was almost completely covered in duckweed, greatly enjoyed by the ducks and moorhens 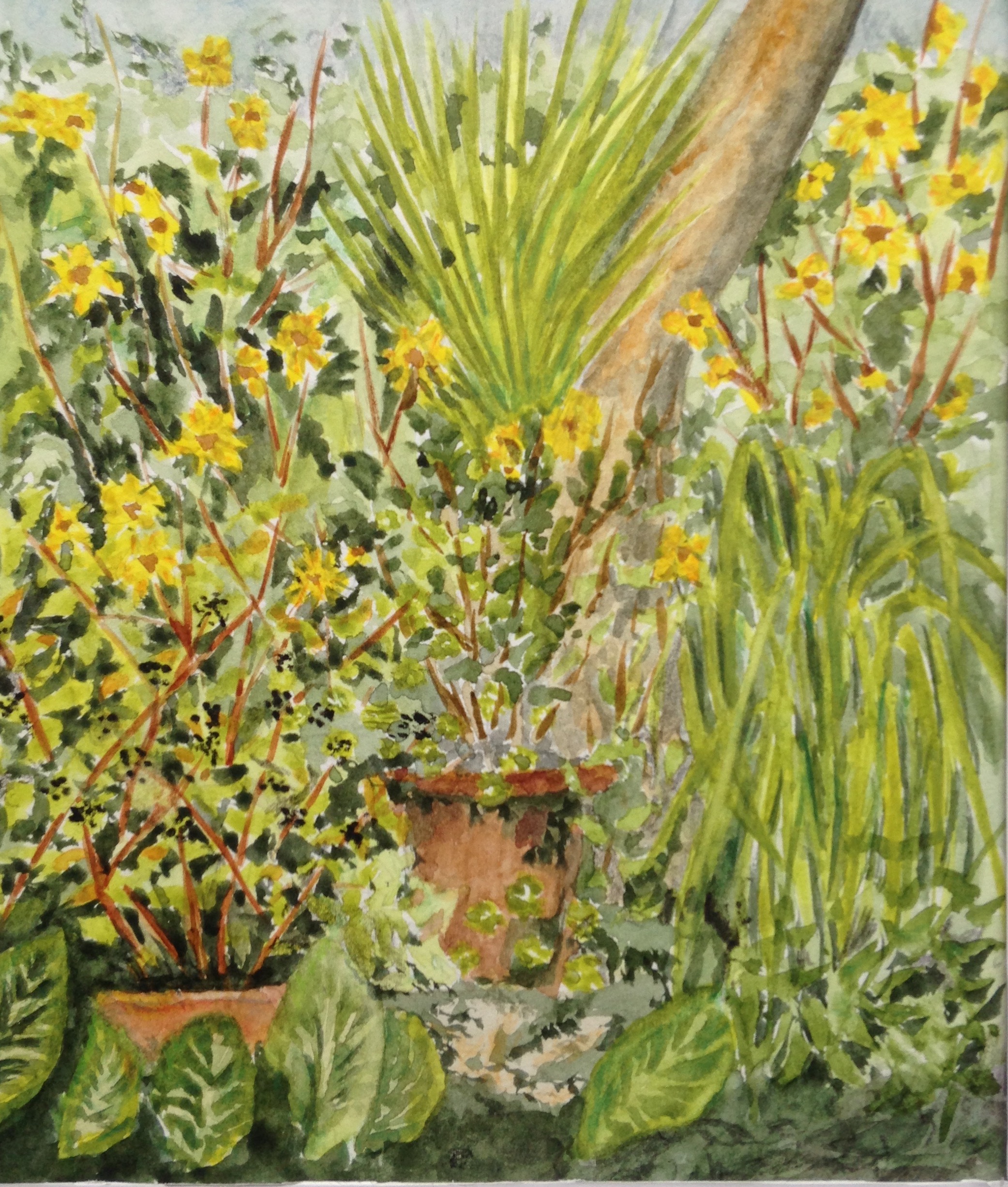 On two of the hottest days of the summer, I sat and painted, watching bees visiting the flowers all day long 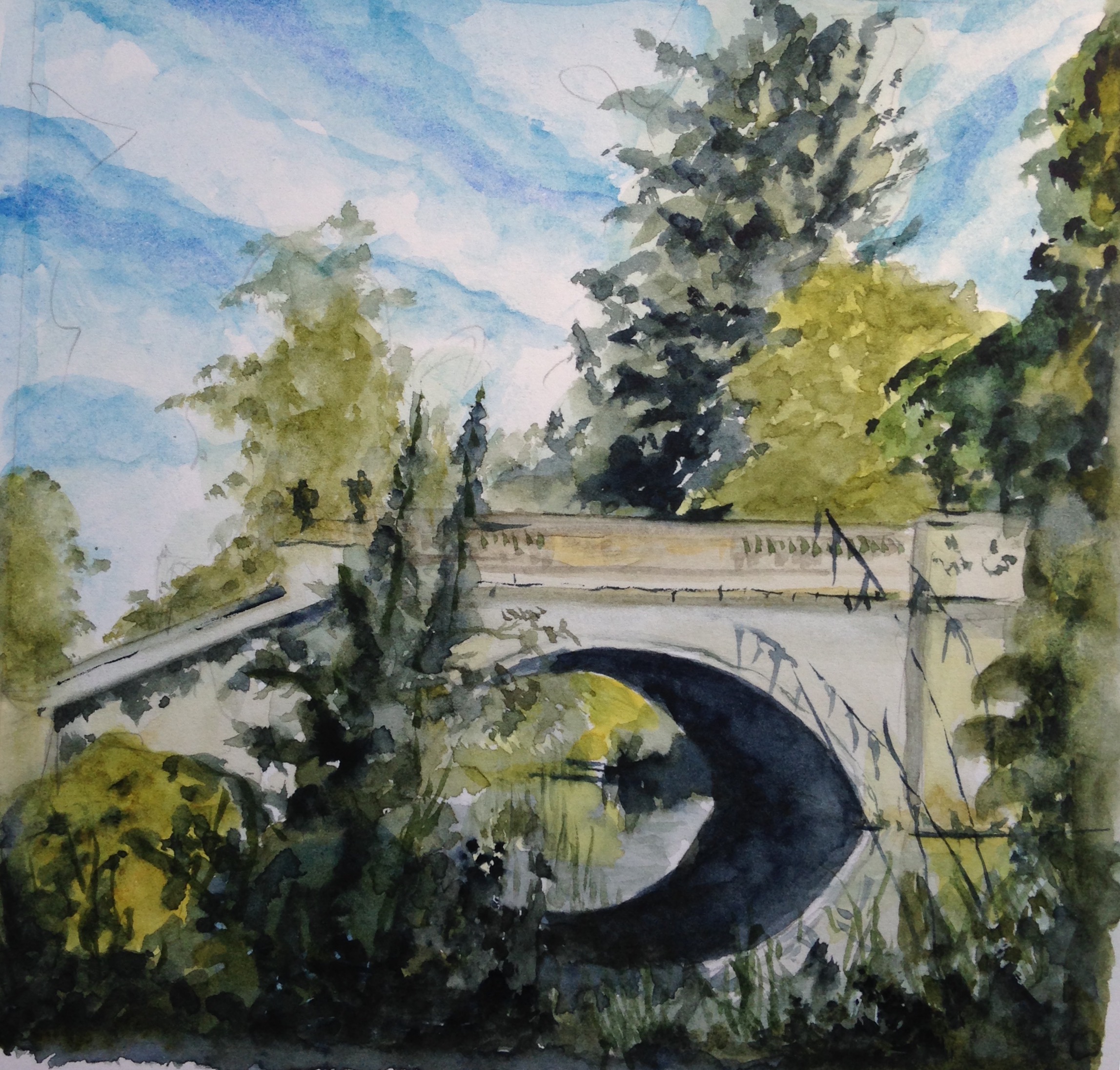 One of the fine structures in the gardens at Chiswick House. The beautiful lines of this 1774 bridge draws one back time and again, sunlight casting strong shadows. 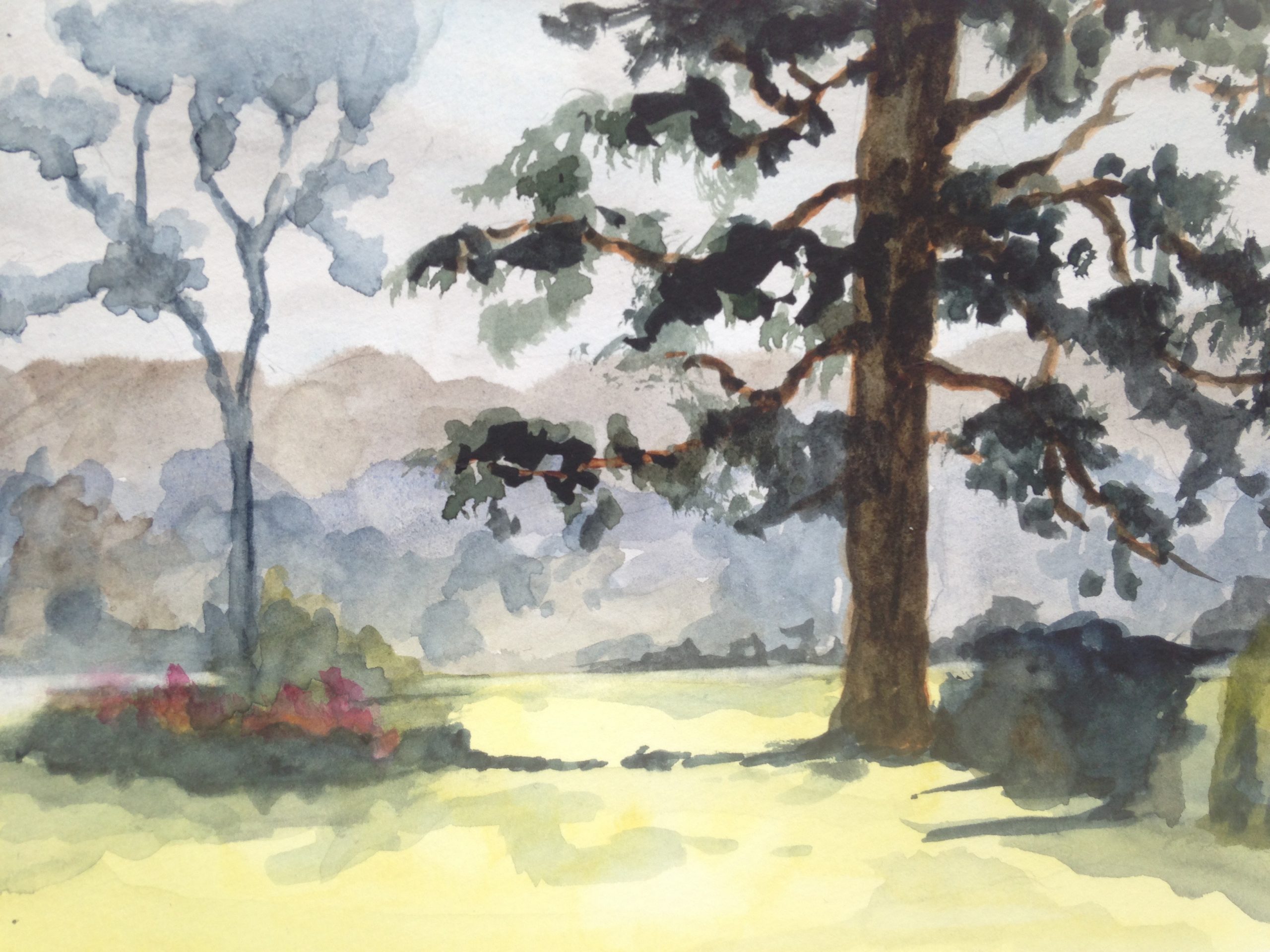 An exercise in strong light through the trees 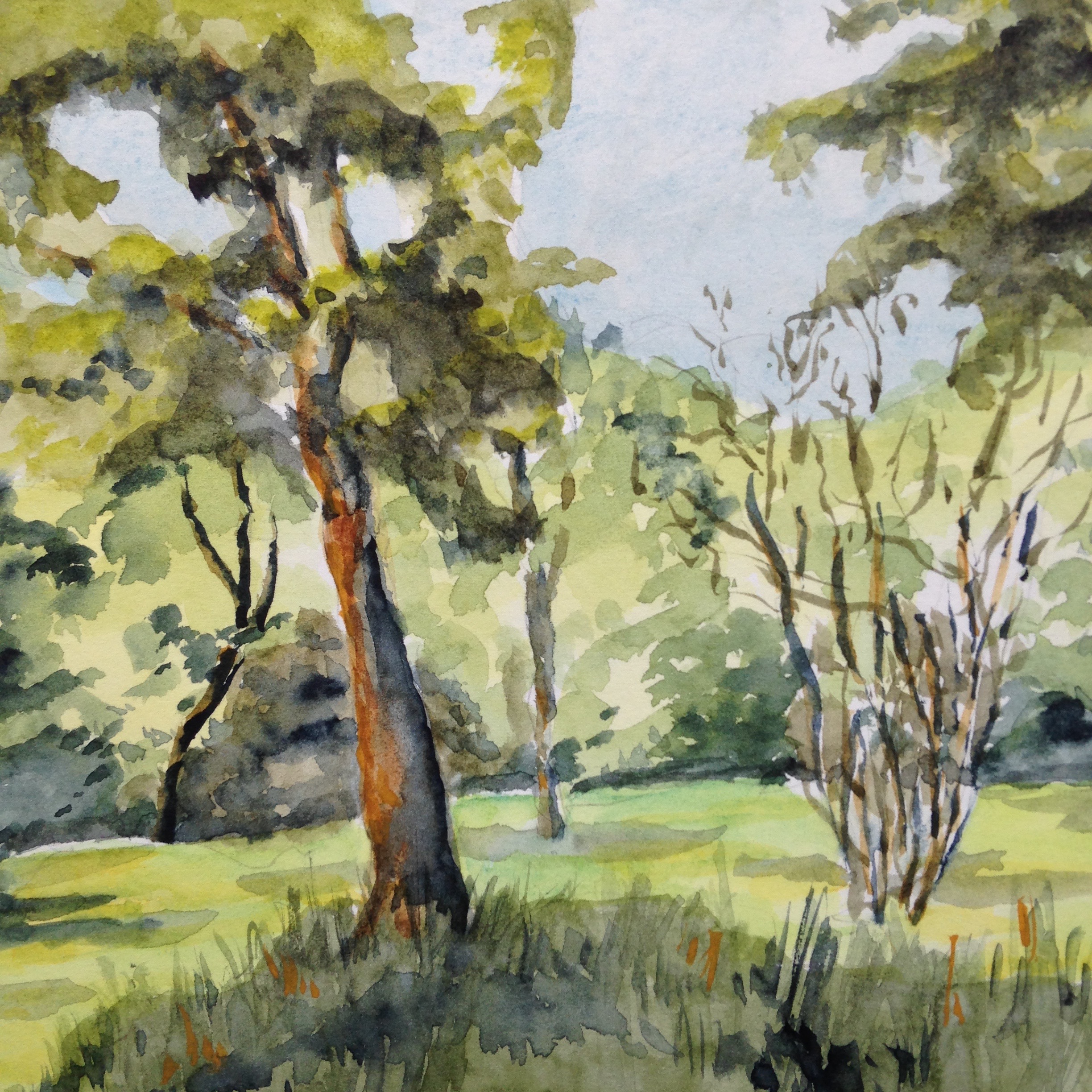 Every visit the light is different, and the trees and flowers have changed 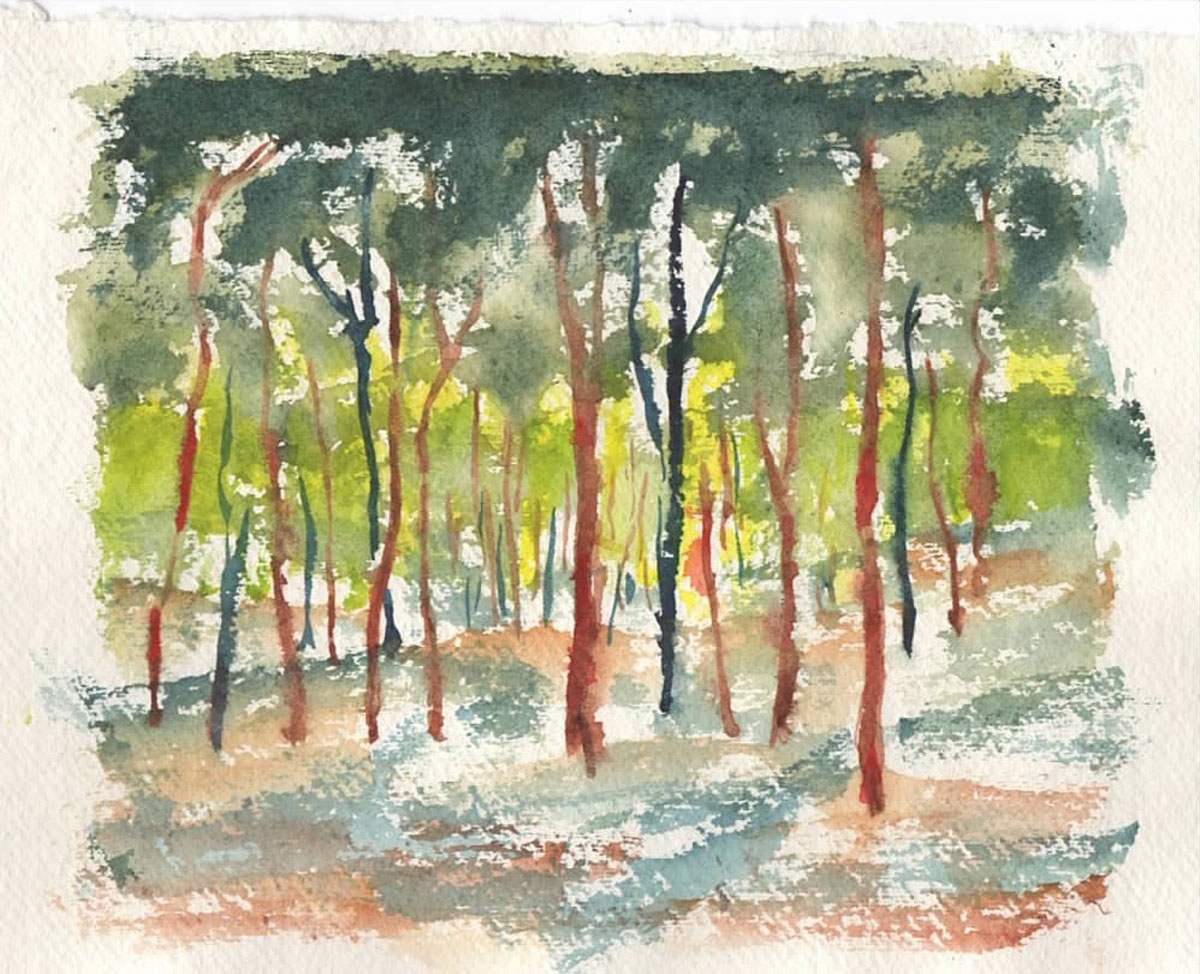 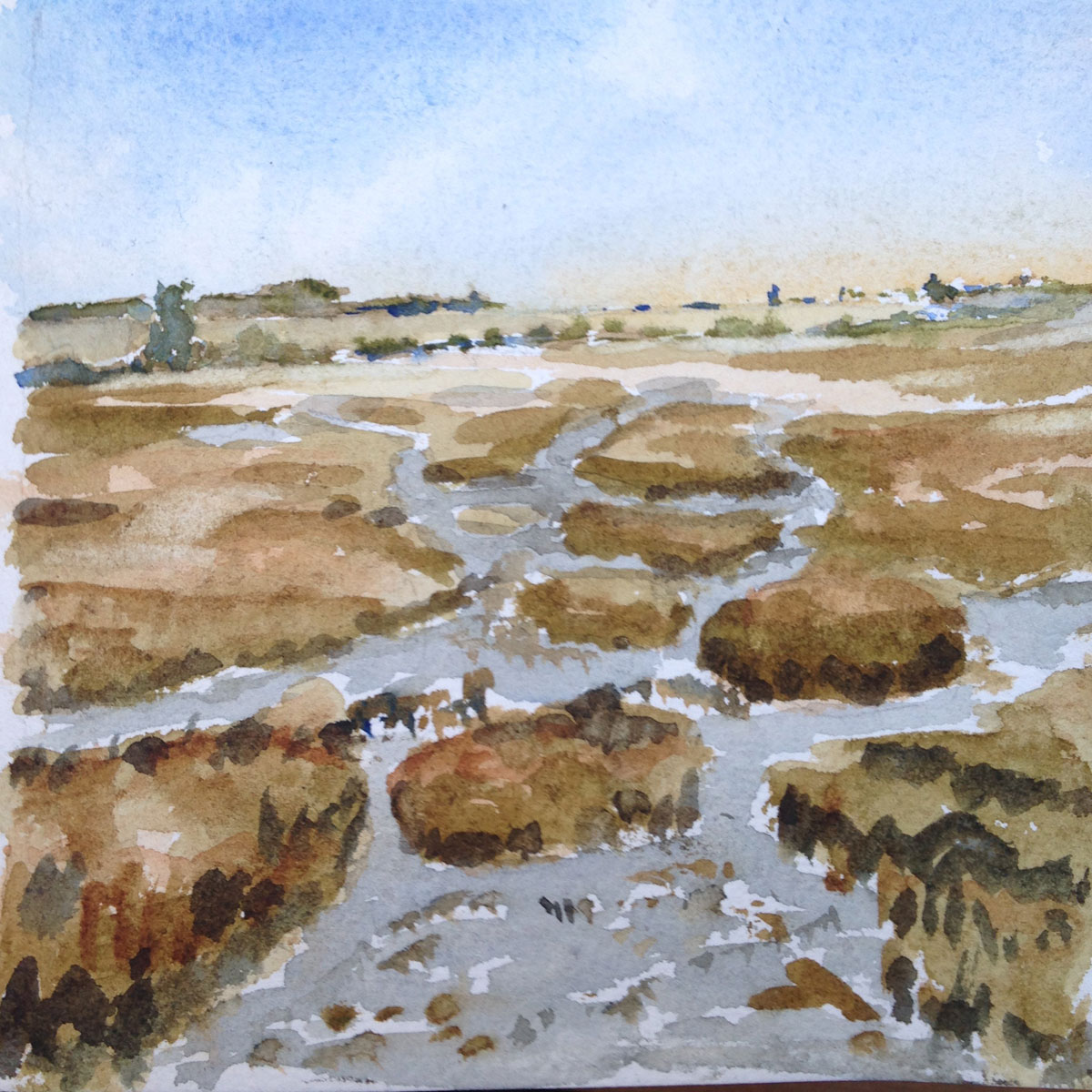 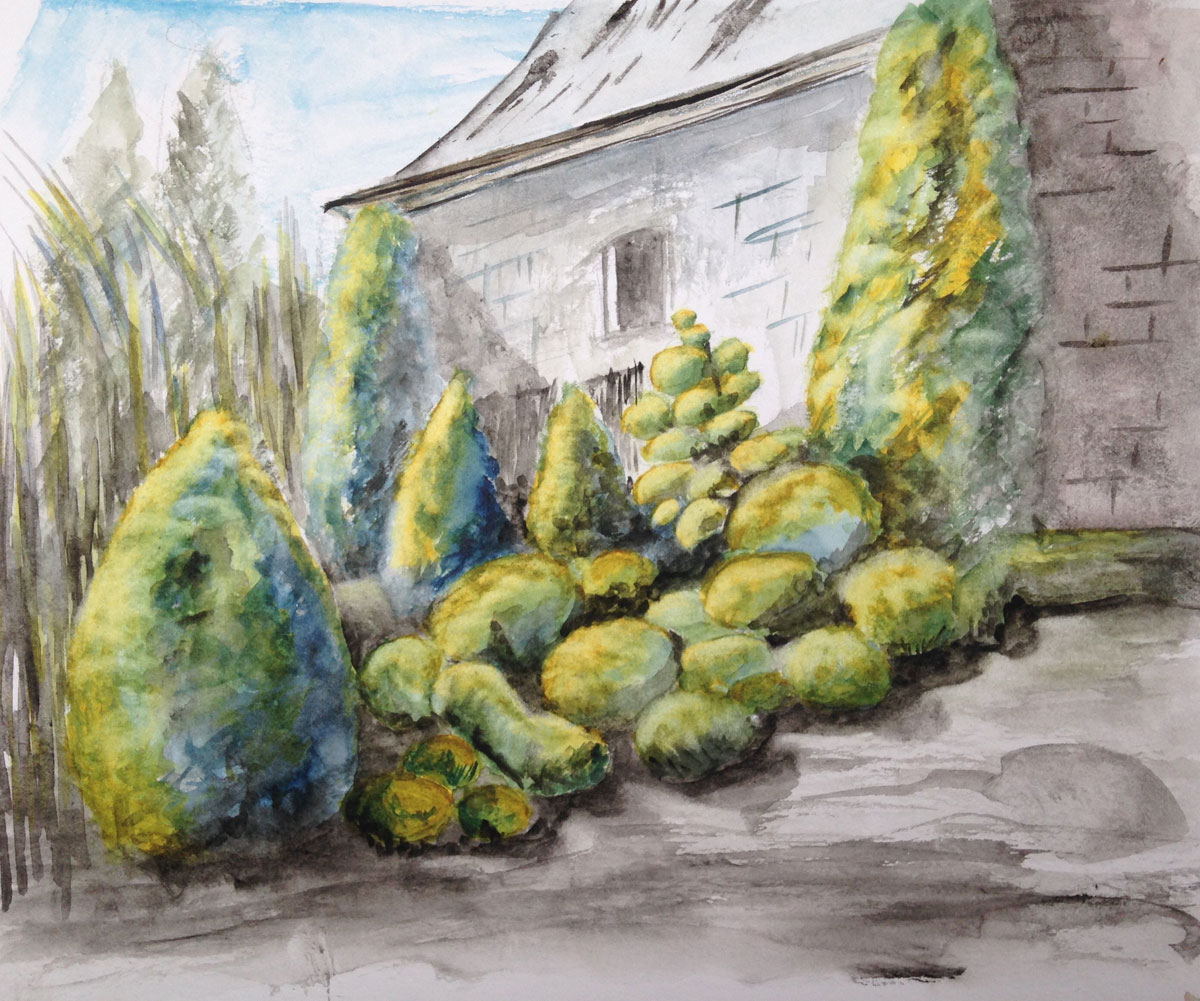 Le Grand Launay is a beautiful house and garden near Lanrivain/Kerien in Brittany, based round an abandoned chateau rescued by a journalist and his wife in the 1970s. Much of the place is inspired by Japanese gardens. 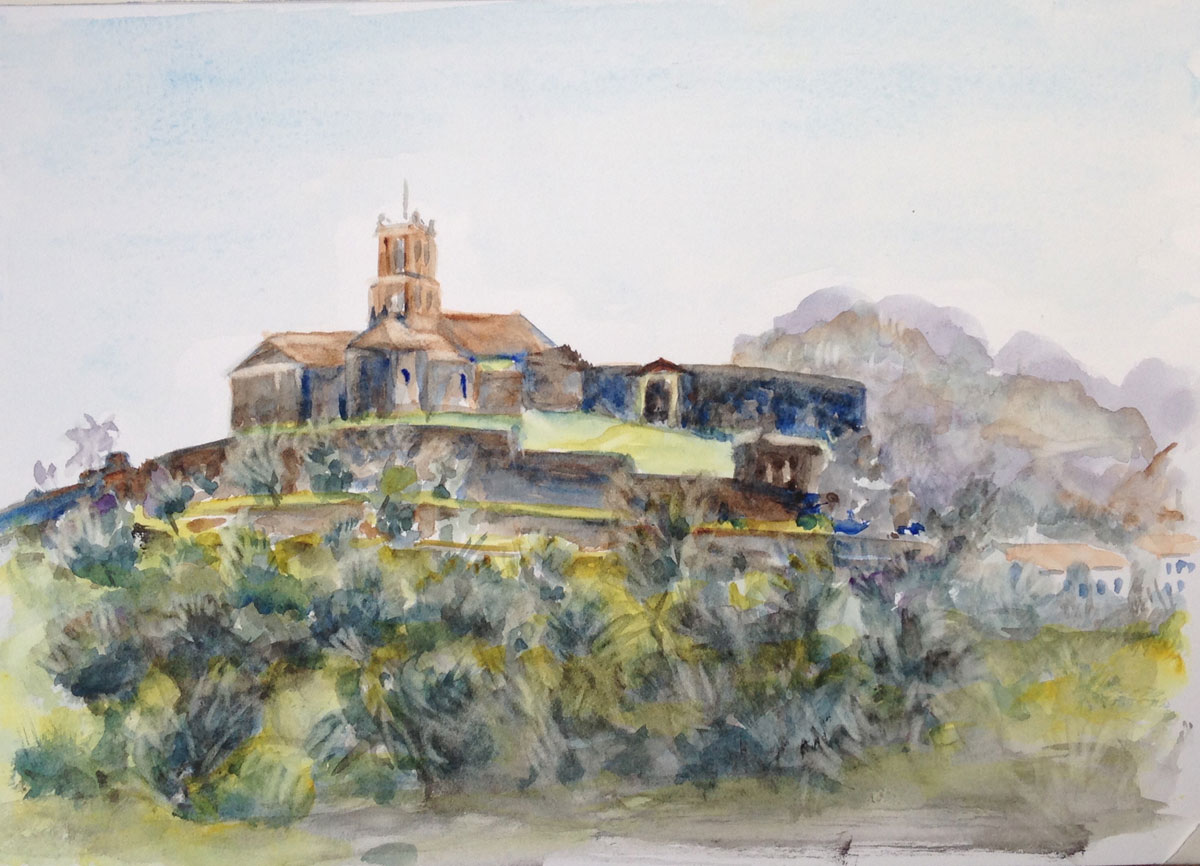 Walking in the Sierra de Aracena, we spent two days in Almonaster la real. On the hill overlooking the town is a mosque dating from the 10C when the region was ruled by the Caliphate. Next to it, is the municipal bullring, used more now for concerts than the corrida. 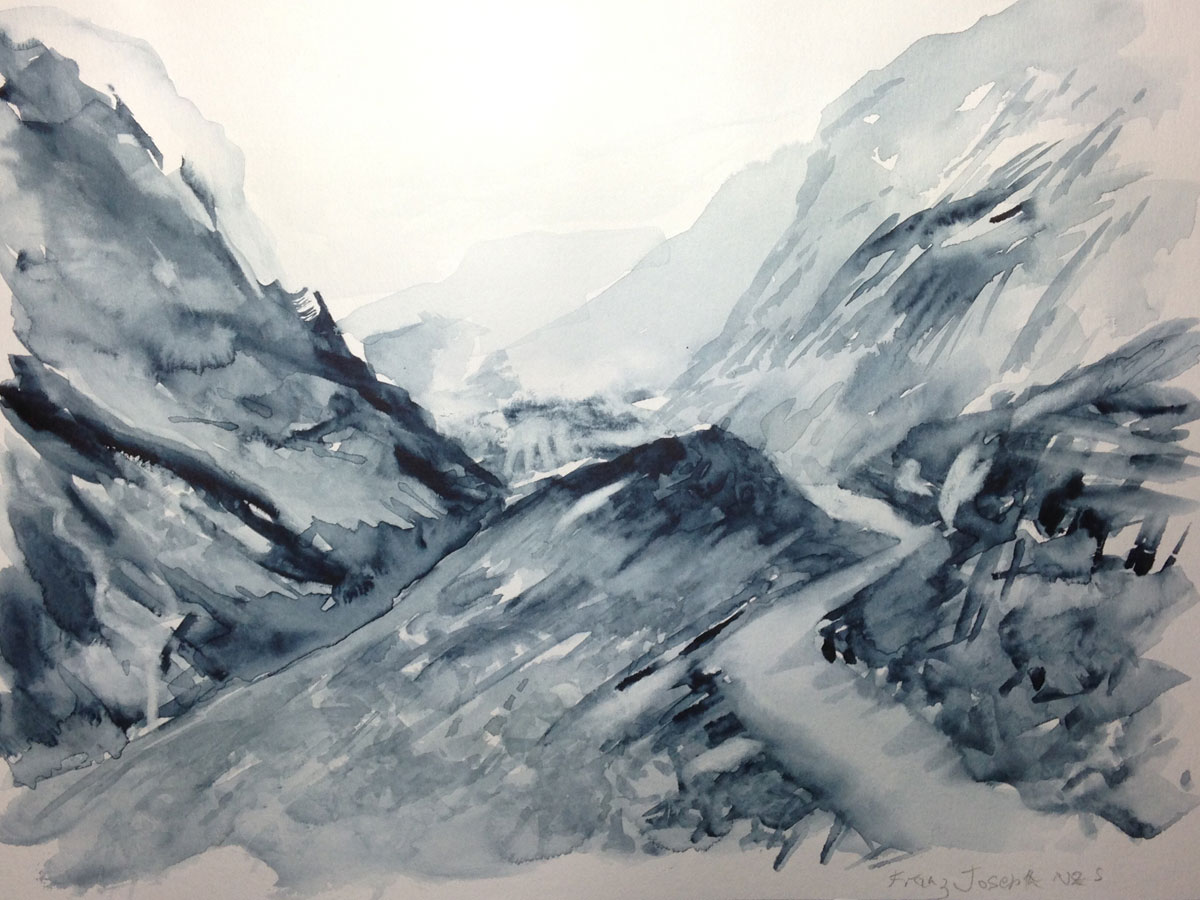 A view of the terminal moraine of Franz Josef, one of the great glaciers in the south island of New Zealand 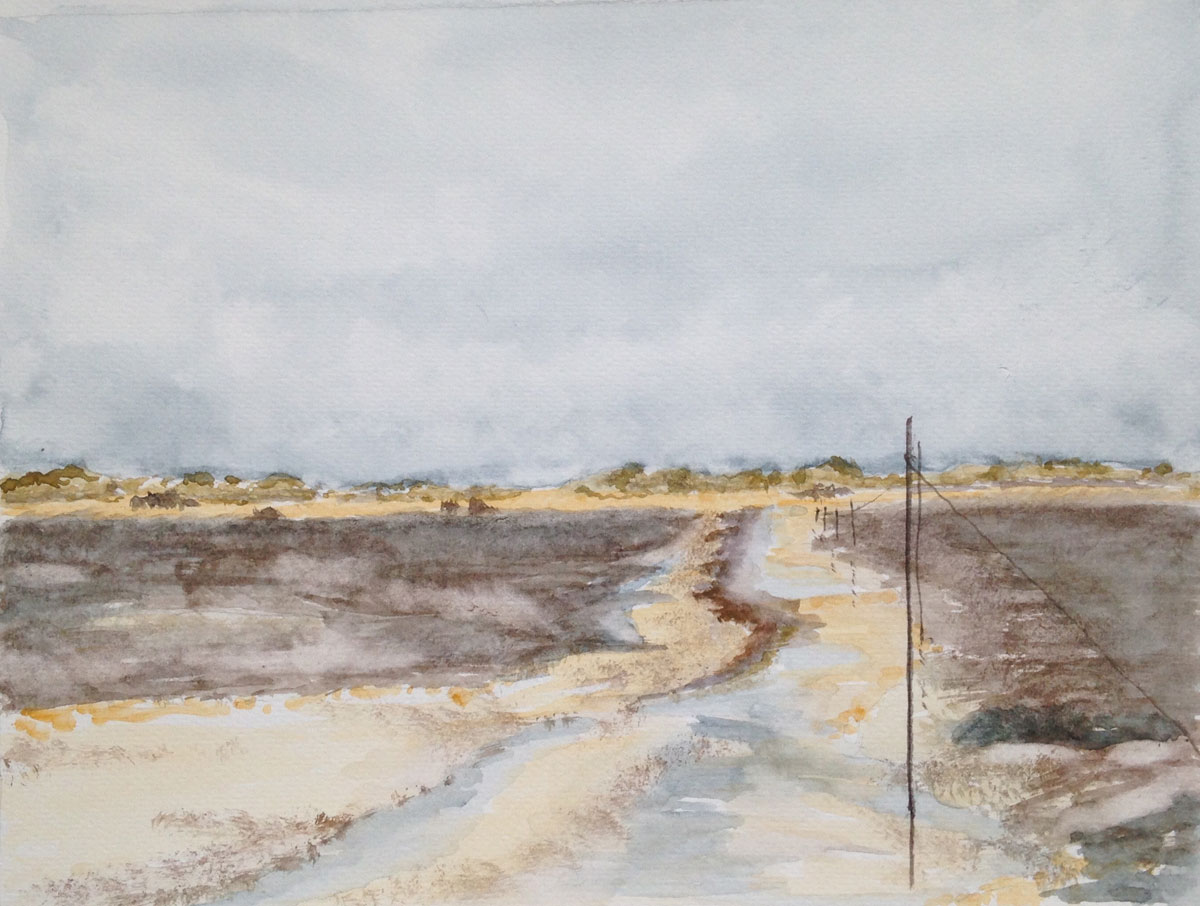 This part of the beach was until recently covered by incoming tides. Now, due to climate change and changes in harbour dredging nearby, it is turning into salt marsh. 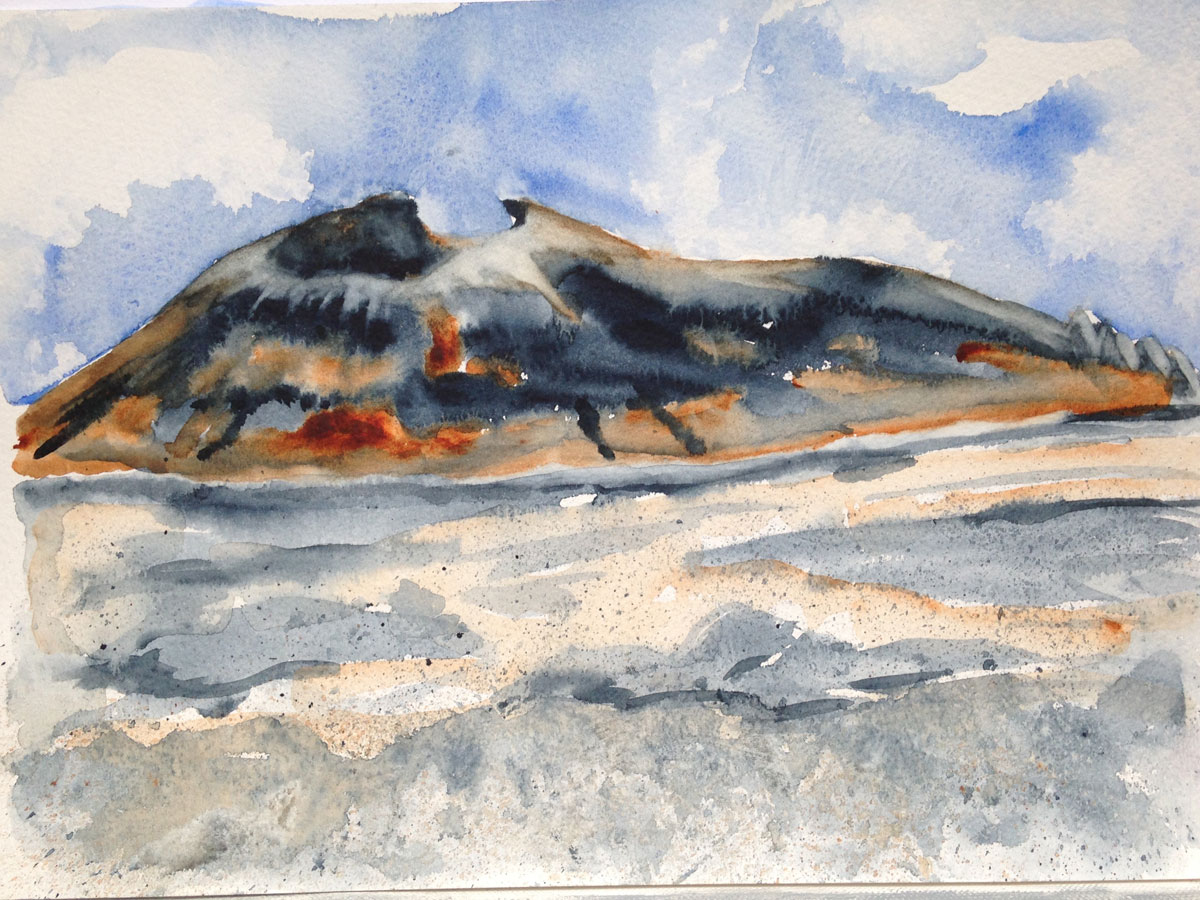 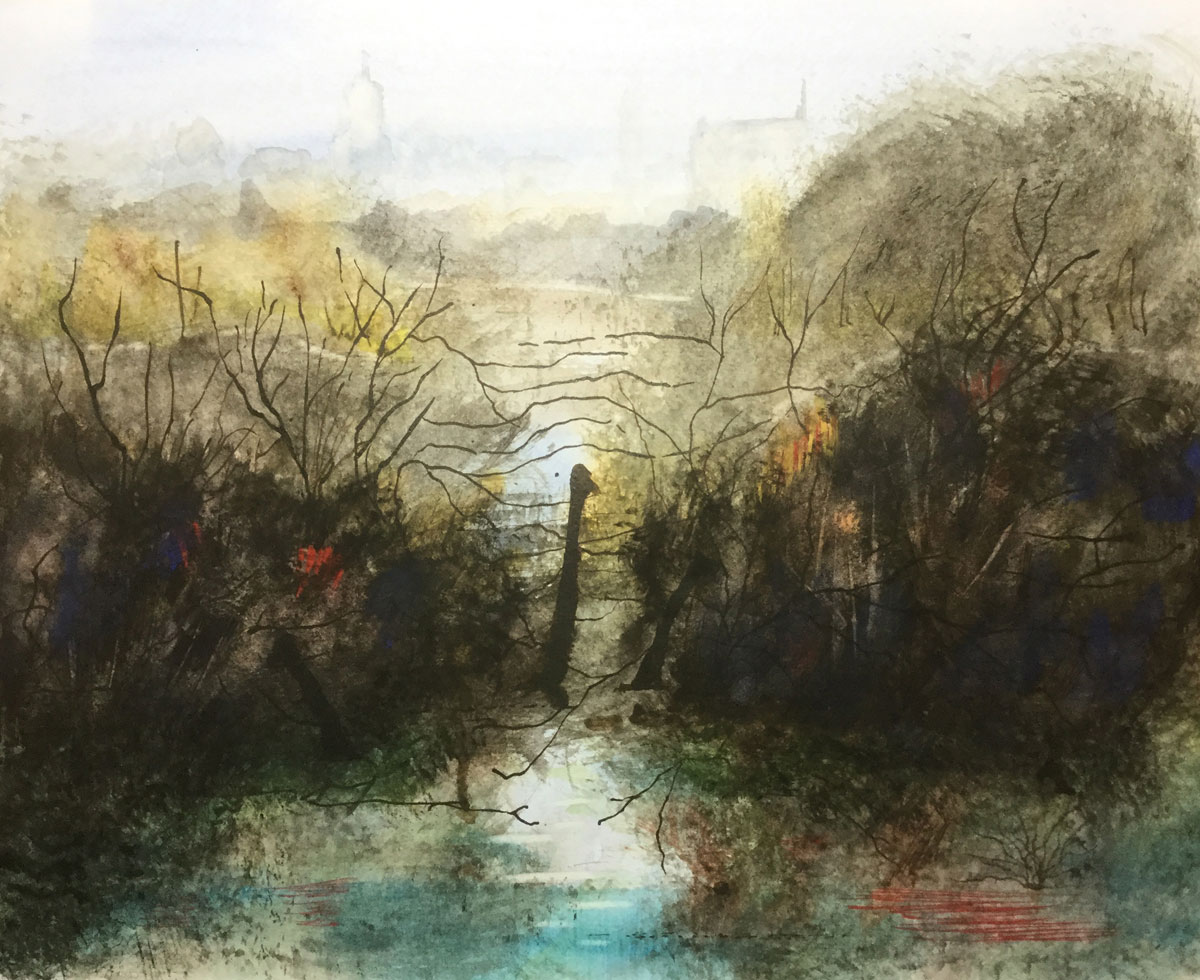 The edge of town 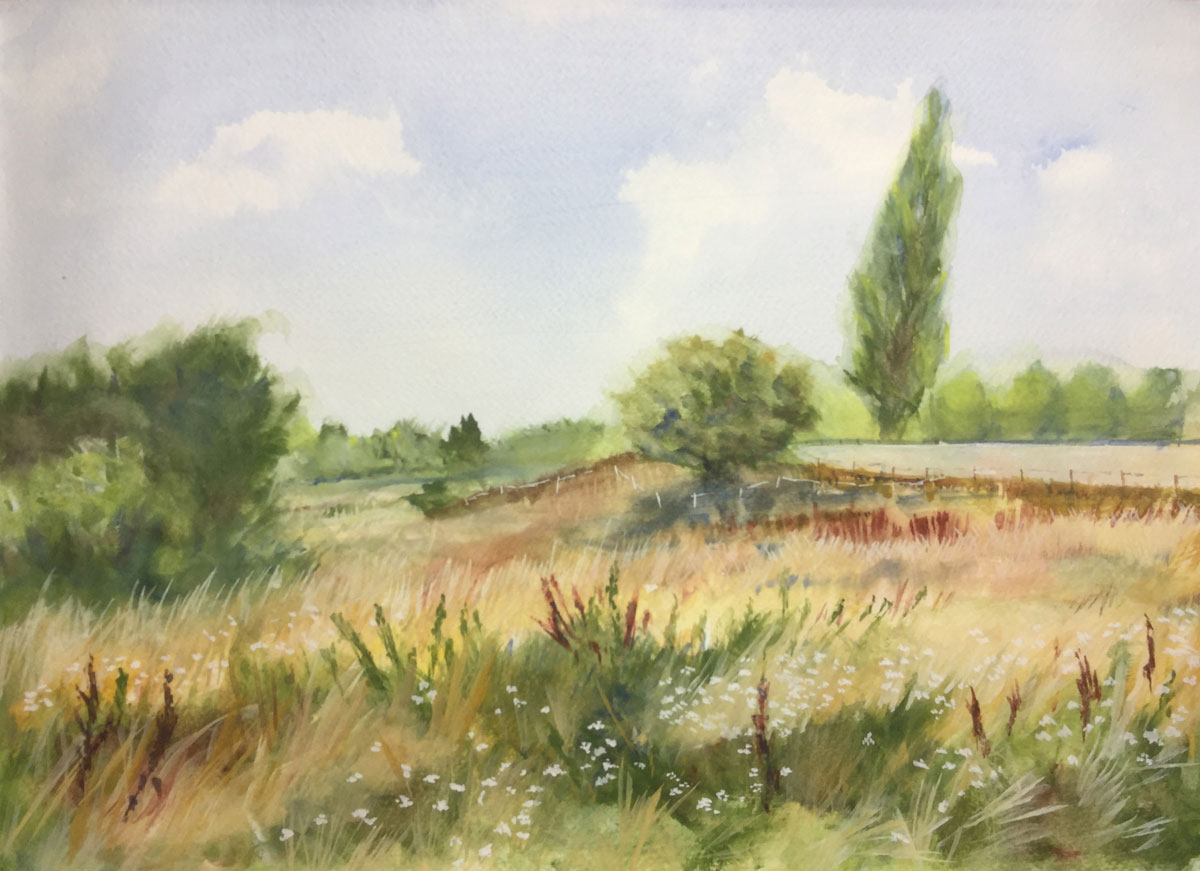 The poplar tree at Alwalton 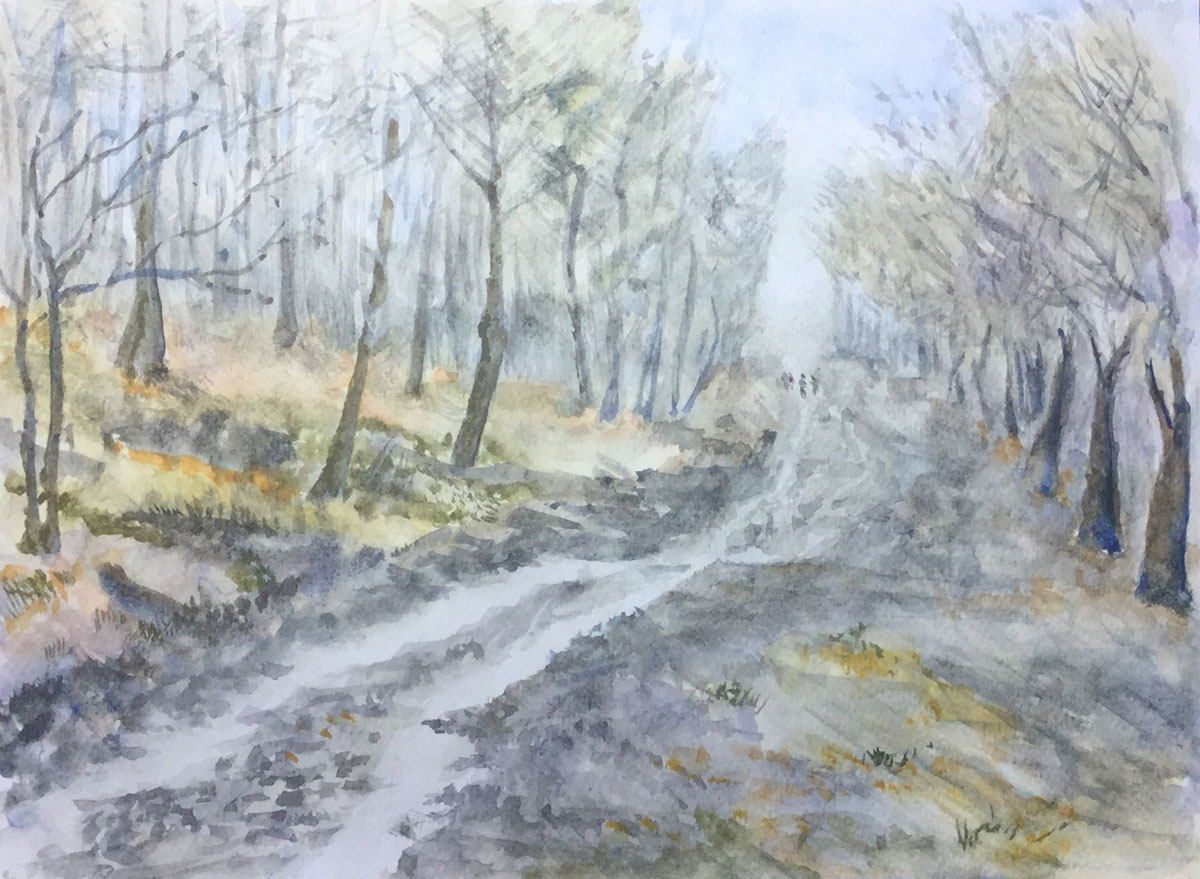 Walk in the Chevin woods, Otley 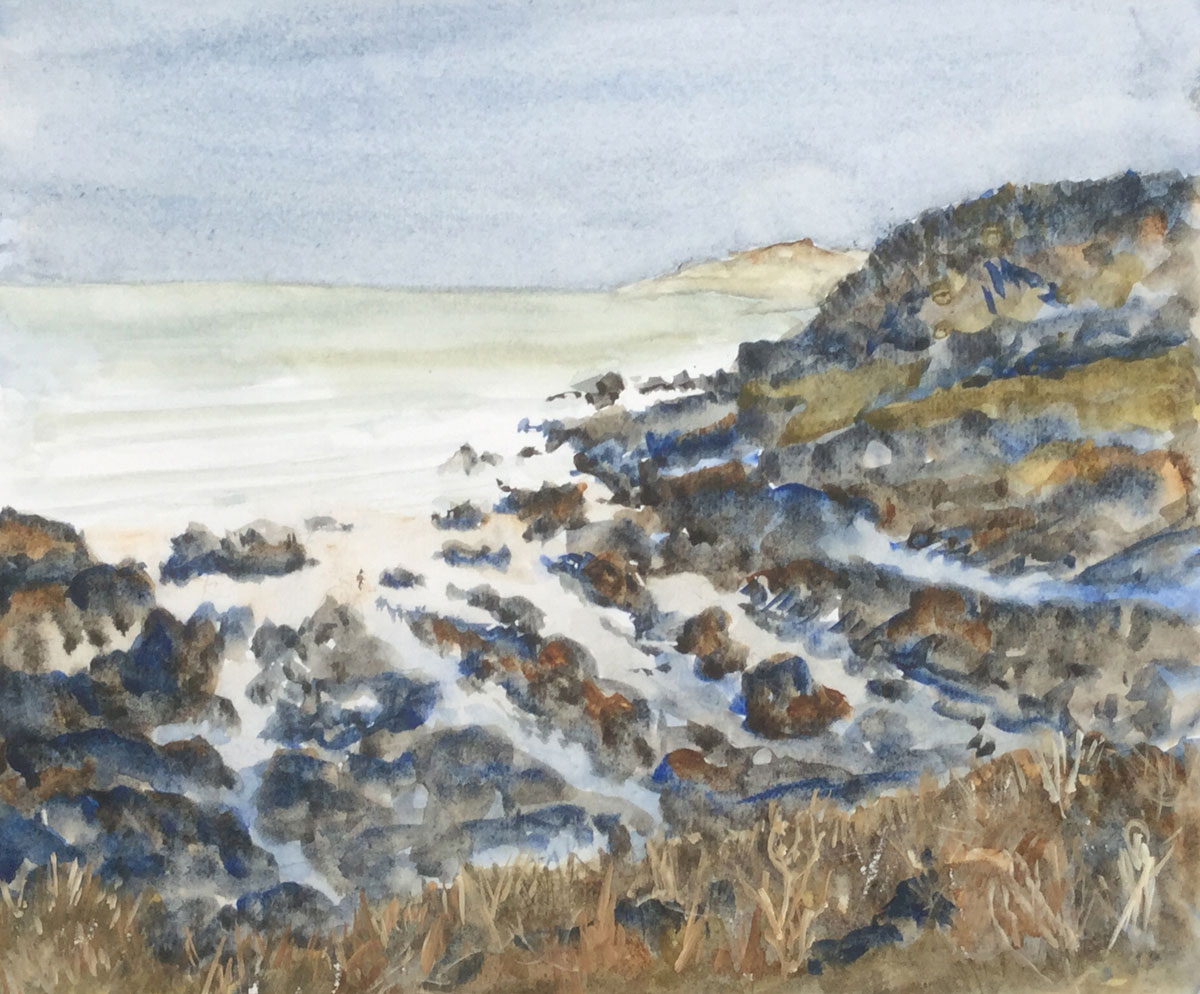 This is at the northern end of Woolacombe Bay. There is a painting of the Bay from its other end in the Oils pages of this gallery. 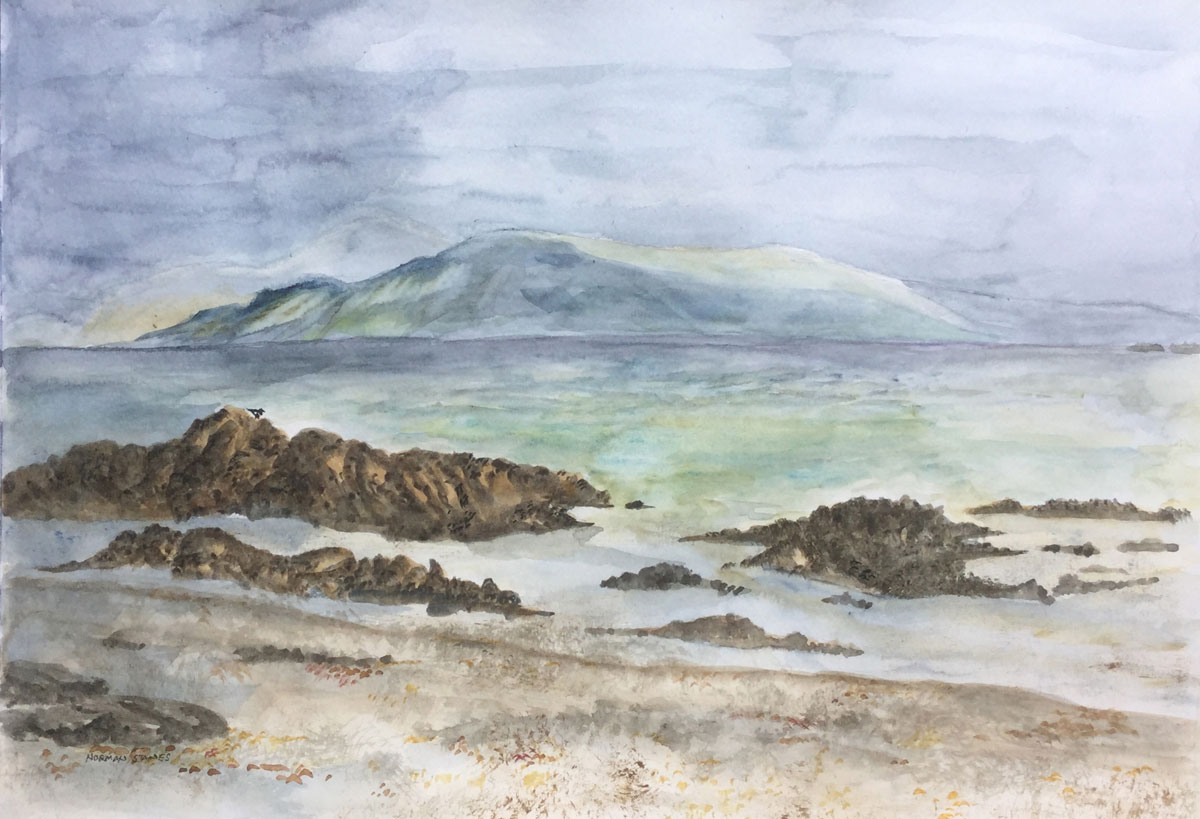 We walked across grazing land which looks towards Mull, Staffa and Ulva, to arrive on the North East shore at the White Strand of the Monks (Traigh Ban nam Manach). This was the site of a massacre of the resident monks by raiding Vikings in C9.  A solitary oystercatcher was the only sign of life on a cloudy day. 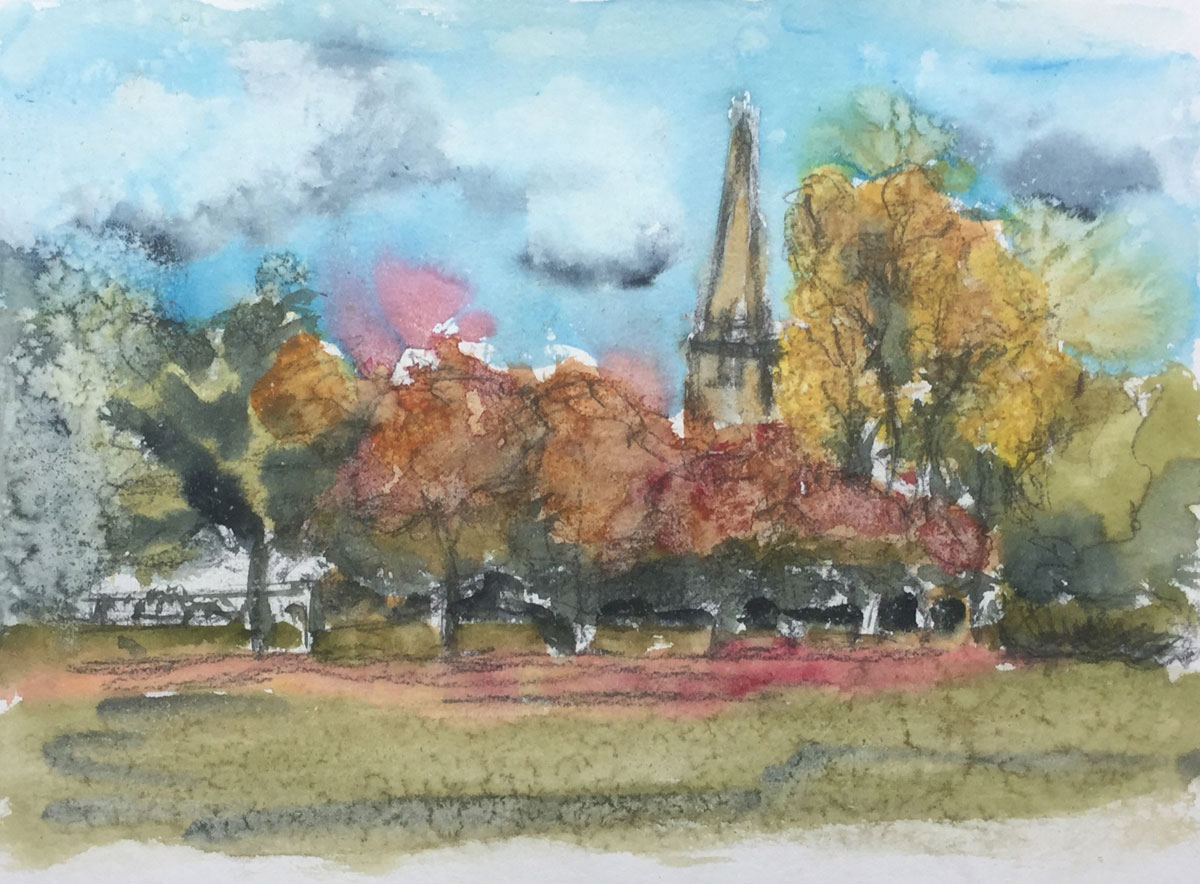 Turnham Green in the Autumn

Now a peaceful park in Chiswick, Turnham Green village was a battle site in the First English Civil War on 13 November 1642. King Charles was approaching London to be faced near the village by over 20,000 London soldiers, hastily assembled to defend the way into the city. Charles is said to have made a grave strategic mistake by withdrawing, rather than diverting to meet up with reinforcements in Kent. He retreated first to Hounslow, then Reading. This is reputed to be the battle site closest to the centre of London during the war, although it is also said a battle barely happened here at all. 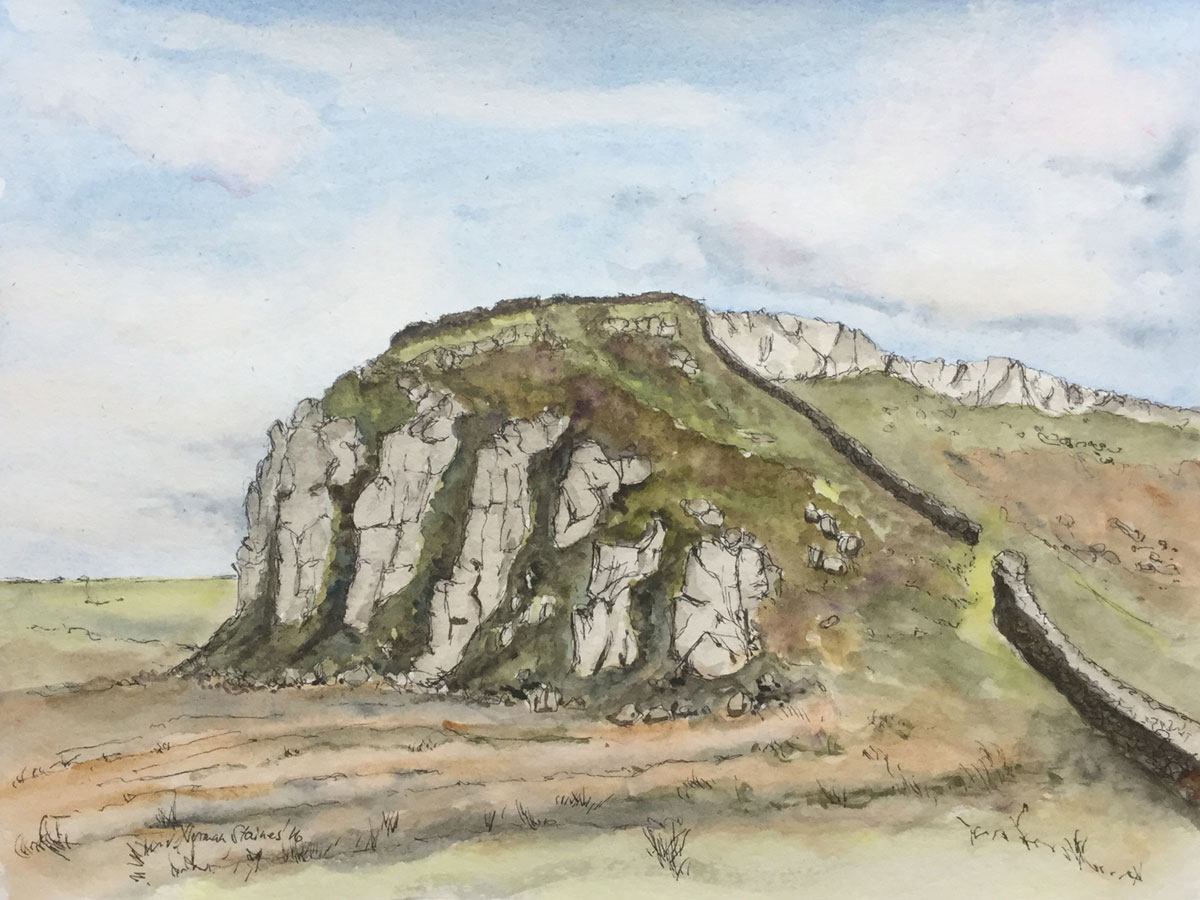 One of many paintings made after walking part of Hadrian’s Wall in Northumberland. Here, the wall snakes up the crags on its way eastwards to the lake of Crag Lough. There are wonderful views north and south from the crag at this point. 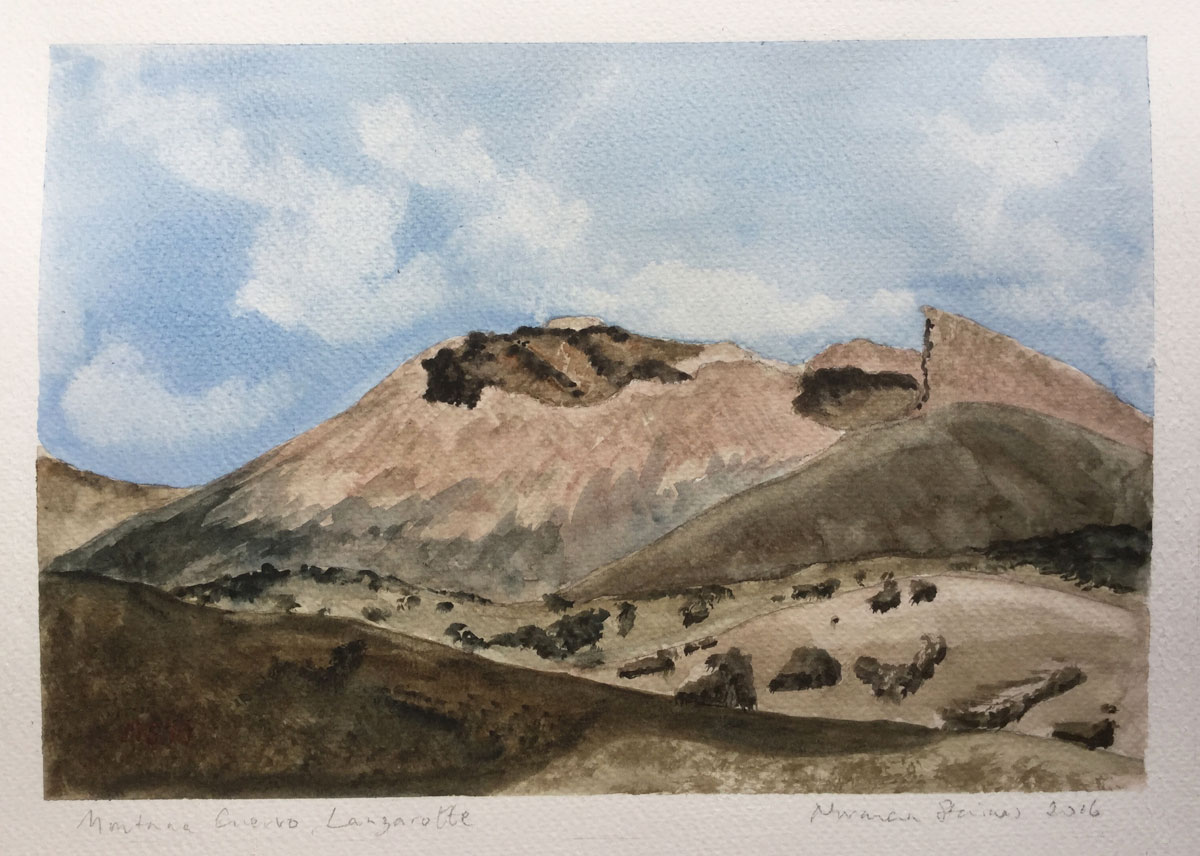 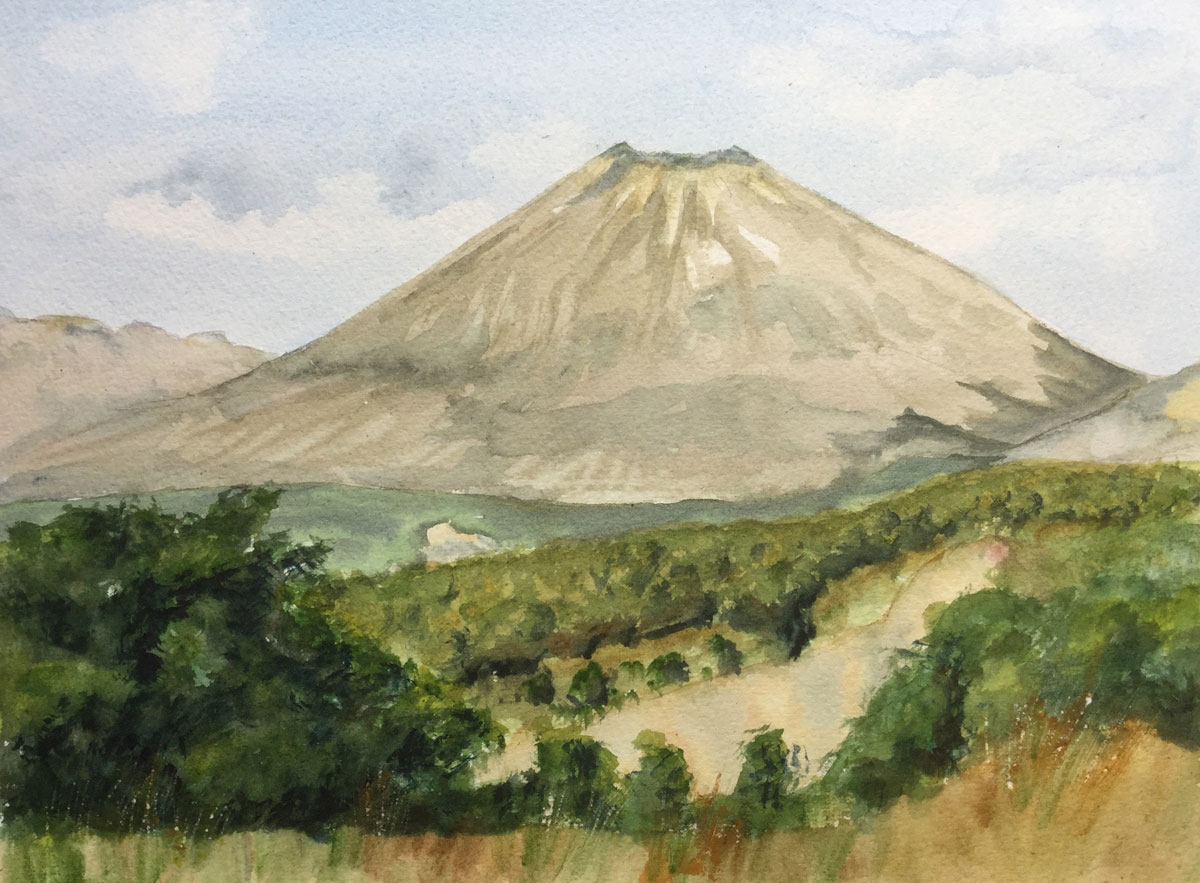 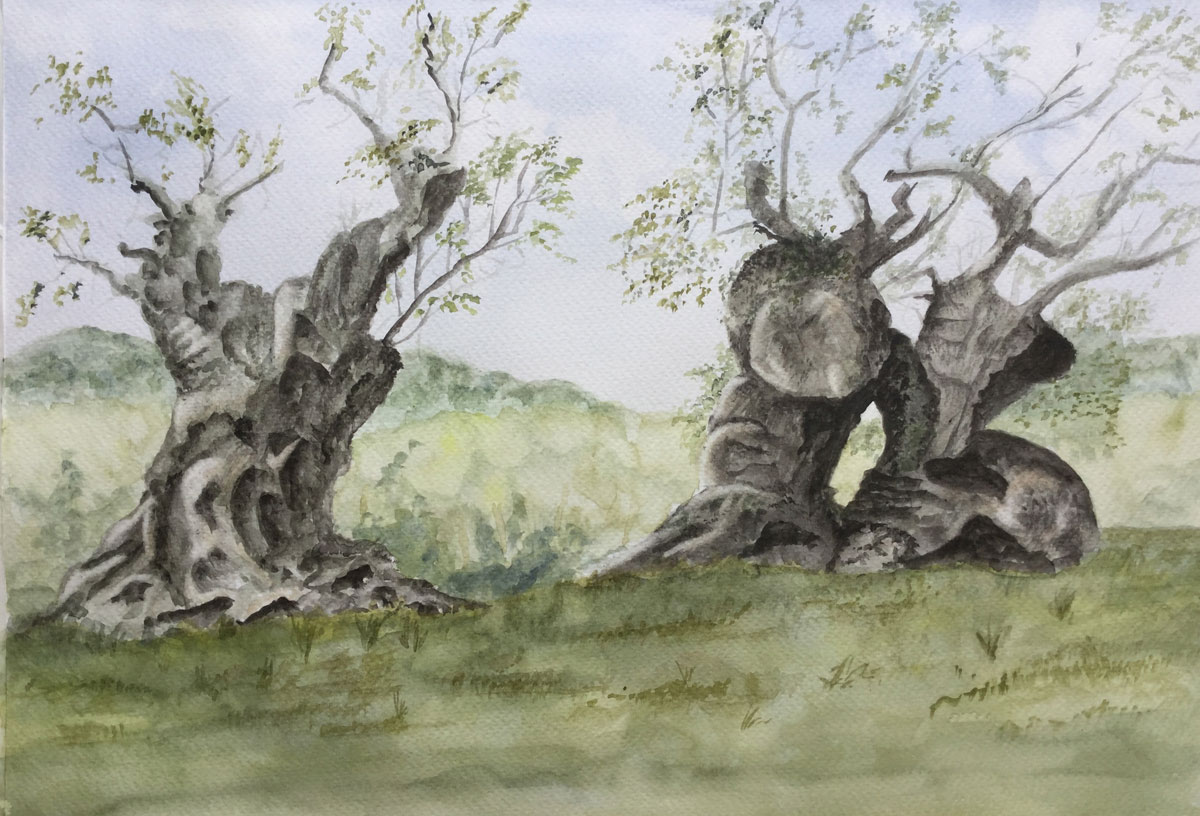 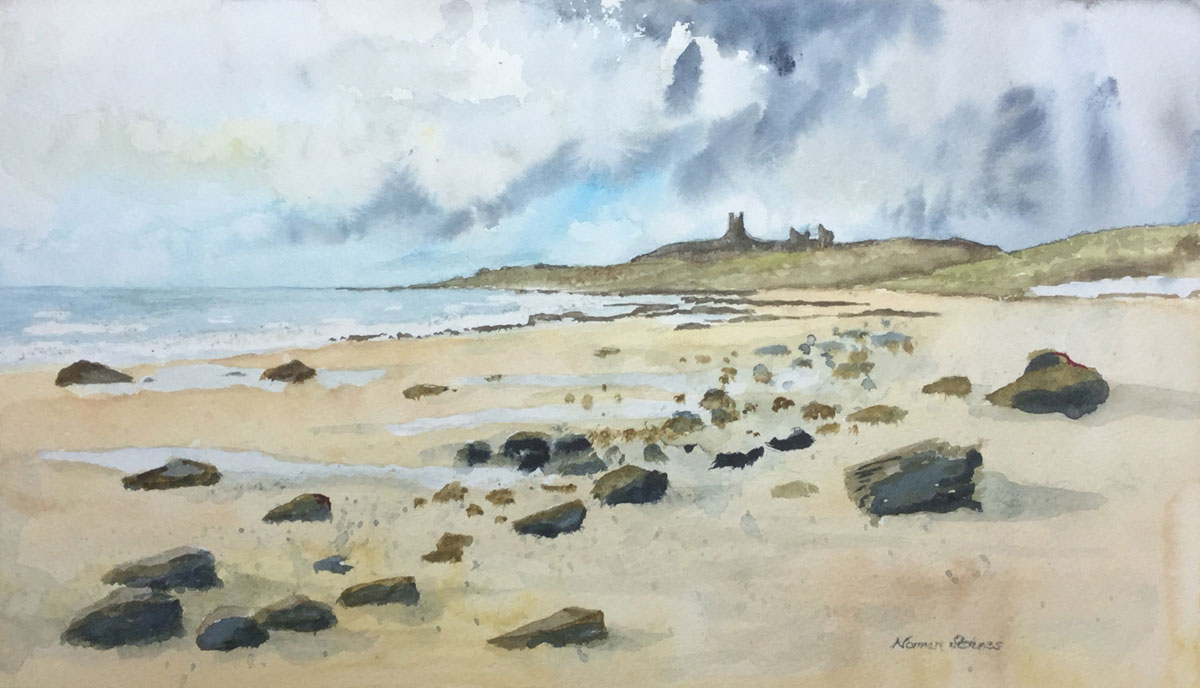 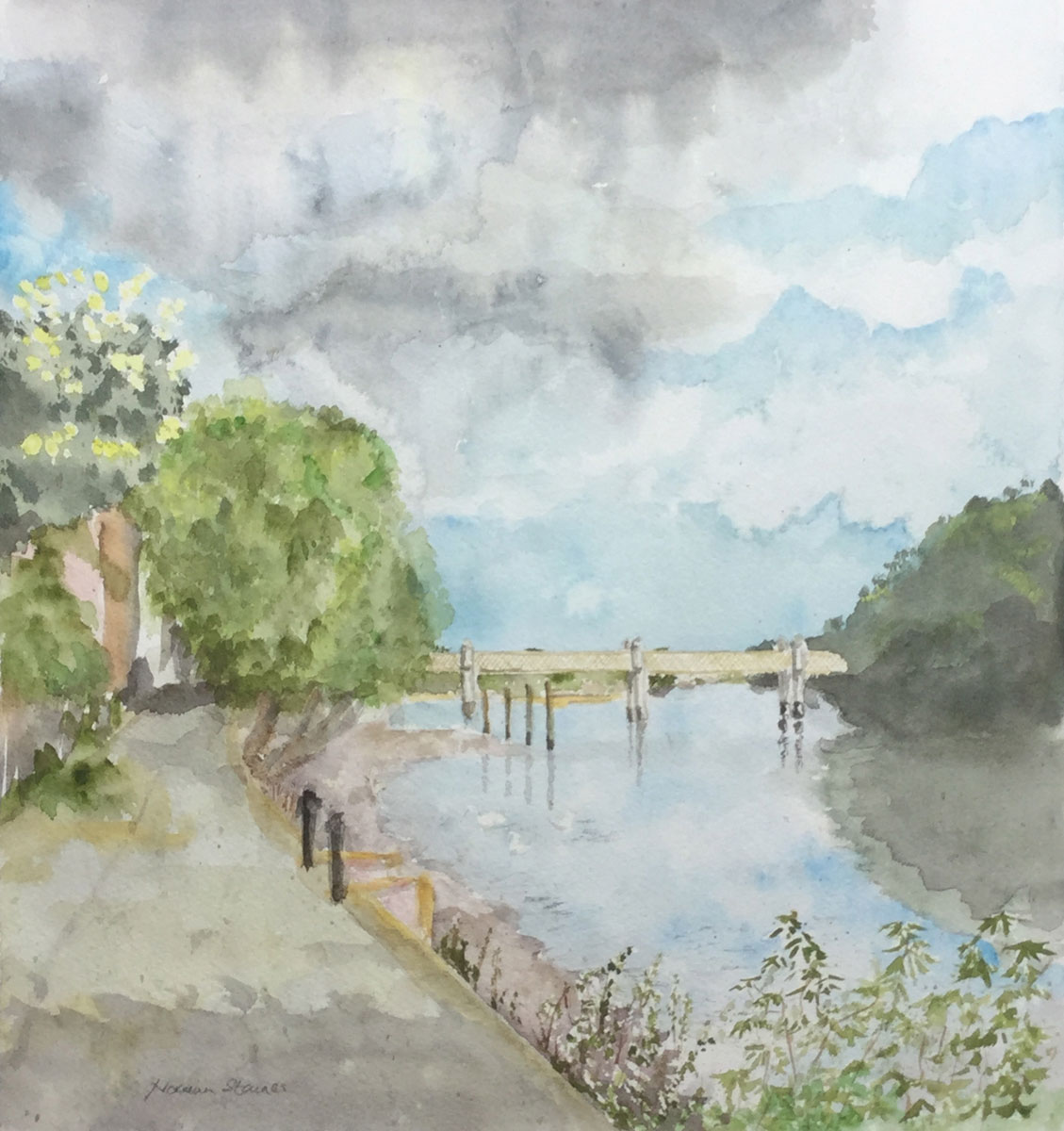 Strand on the Green, Chiswick

I have an oil painting of a similar scene in the other gallery pages. 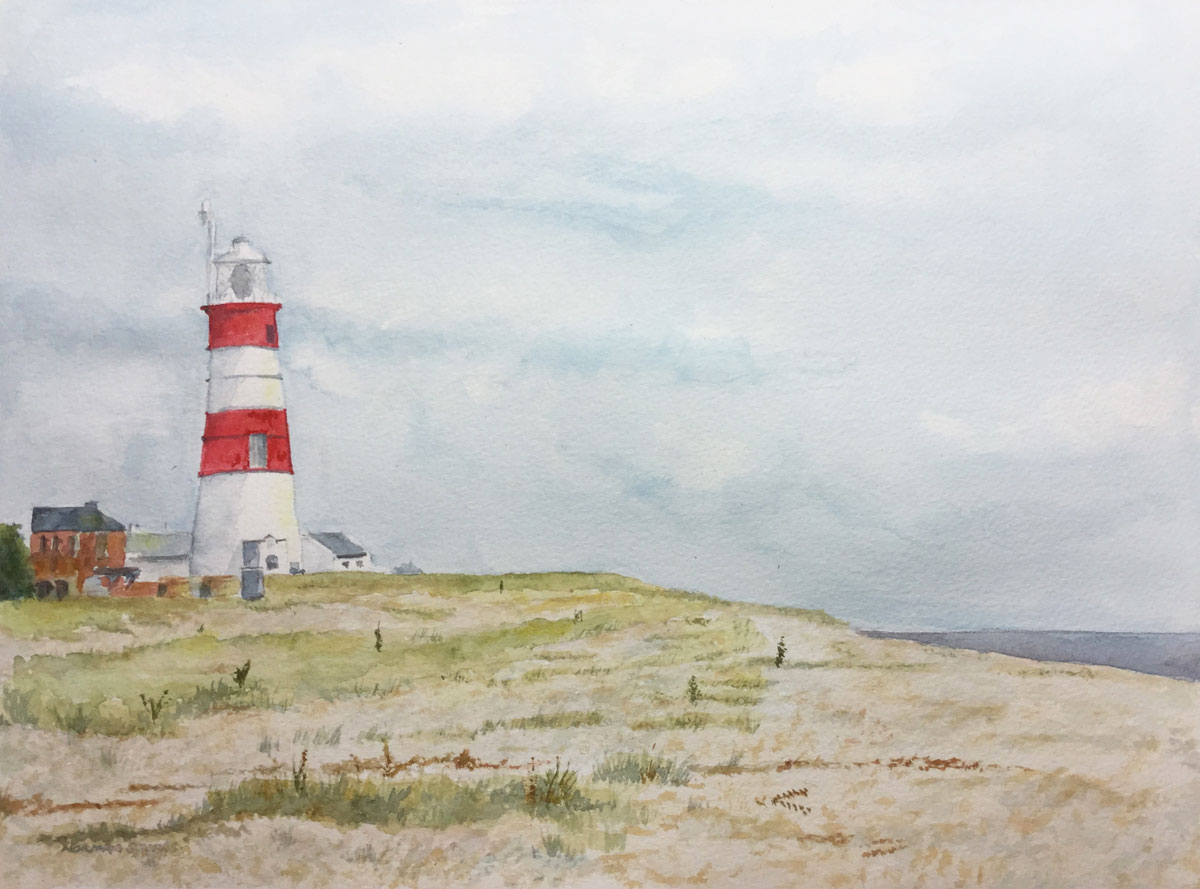 This spectacular landmark on the Suffolk coast is now scheduled for demolition. Two fierce storms in February 2020 took away much of the surrounding beach, destroyed buildings and the concrete pathway round the lighthouse. It is hoped many artefacts of its will be preserved.